Adrenal Fatigue Is Not Real: Part I

The term “adrenal fatigue” started sometime in the 1970s. It served as an explanation for patients who suffered from fatigue that could not be explained by other causes. This was never an appropriate term for what is happening, but it helped doctors and patients through a time where some of these symptoms were hard to explain. Pioneered by natural practitioners, this diagnosis spread like wildfire.  To this day, it’s uncommon to leave a natural medicine clinic and not have adrenal fatigue on your list of diagnoses.  Are they wrong?  Not necessarily, the explanation of what is happening may be what is lacking.

What are the adrenals?

The adrenal glands are endocrine glands responsible for producing hormones like adrenaline and steroids like aldosterone, DHEA and cortisol. Each gland sets atop a kidney.  The sit on top of the kidneys (renal), hence the name, add-renal. 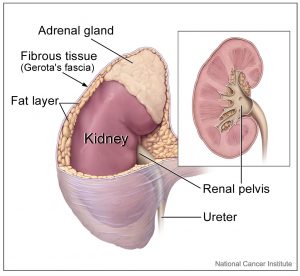 The adrenal glands set atop the kidneys. Their is significant communication between the adrenals and kidneys.

As with most organ systems, the brain and more specifically, the hypothalamus and pituitary orchestrate the release of hormone from the adrenals.  Because of this, these organs are collectively named the HPA axis (hypothalamic-pituitary-adrenal axis). In this endocrine community, the adrenals are merely a puppet to the direction of the brain. You will soon see why this term is mostly inappropriate.

Stress comes in many forms.  The amygdala is an area of the brain that is highly involved in the stress response system. This area is the area that controls emotions, emotional behavior, and motivation. All of our senses send signals to the amygdala, which uses these signals to tie emotions to these senses. 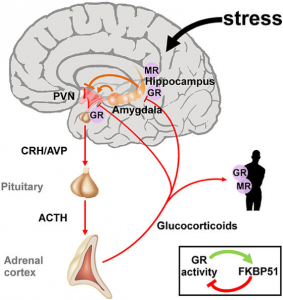 Do warm chocolate chip cookies make you think of grandma’s house? Or think about how the smell of smoke has taught us to fear fire when we smell it.During perceived stress, the amygdala signals the hypothalamus. The hypothalamus acts as a “control center” and communicates with the rest of the body. The hypothalamus then releases corticotropin releasing hormone (CRH) which acts on the pituitary. This signal releases another hormone, ACTH which acts directly on the adrenal glands.

If true adrenal fatigue is present, then the signals being produced by the brain will be ineffective because the adrenals are failing.  The adrenals do not respond to commands because they are too “tired”; this disease is known as Addison’s disease.  It is a severe, autoimmune disease that causes the adrenals to produce inadequate hormones and can be fatal if not treated.

“Adrenal fatigue” is not purely the exhaustion of the gland but rather a miscommunication in the signaling cascade that leads to alterations in surrogate markers àDHEA, cortisol, etc.

What we commonly hear referred to as “adrenal fatigue” is actually a signaling and feedback issue, not necessarily adrenal gland exhaustion. The adrenals function correctly, but the signals they are receiving are skewed.

How do we know this? Stimulation and suppression tests.  These involves injecting subjects with hormones that control the adrenal glands.  When given the proper signal, the adrenals function normally.  Individuals with “adrenal fatigue”, during stimulation tests will produce appropriate hormones, such as cortisol.  During suppression tests, these same hormones are blunted. This is unlike people with Addison’s where injecting stimulating hormones fails to produce an adequate adrenal response. Yes, it that simple. The adrenal glands themselves are ready and up to the task only if they are receiving proper signals from the brain, more specifically the pituitary.

In healthy individuals, the brain detects elevated levels of cortisol circulating in the blood and inhibits more from being released. This is negative feedback. 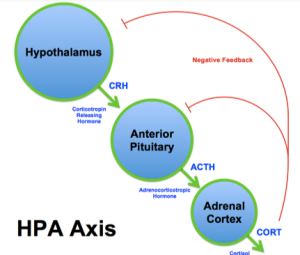 The negative feedback loop controls the release of hormones.

In major depressive patients the feedback mechanisms are not as sensitive.  The brain perceives the amount of cortisol released as inadequate and it ramps up the production. This results in elevated, sustained cortisol levels. This tends to be the opposite cause in post-traumatic stress disorder (PTSD) where the result is low cortisol. The biologic checks and balances are malfunctioning.

Other syndromes, like polycystic-ovarian syndrome (PCOS), can result from miscommunication in the hypothalamic-pituitary-gonadal axis.

Unfortunately, this is not as clear as we would like. At first, you would think, just run the hormones involved and it should be easy to see what the state of the patient is in.  Well, that would be true except we are dealing with an organ that responds to stress. Any stress.  Whether you’re sick, aggravated, cold, hot; those organs mentioned will jump into the mix which makes it difficult because this is a highly variable response from day to day, actually from hour to hour.

One test that we like to run is the Cortisol Awakening Response, CAR.  This looks at multiple values the first hour of the day.  Within the first 60 minutes of being awake we normally don’t have as much variability.  No traffic or aggravating phone calls yet.  No messages from the school principle that little Tommy stuck his peanut butter and jelly in Sammy’s hair again.  Plus we do have a nice consistent stimulus in the AM to see how the HPA axis responds and that is waking up.

The treatment you were given for your “adrenal fatigue” is likely still valid, but the therapeutic mechanisms are different than you were thinking. They are not super charging the adrenal glands, but working on the hormones and receptors that control adrenal function.

Why bring all this up if the same therapies we have been using for decades are still relevant? One, we should always be striving for the most accurate and efficient therapies. Two, understanding this interconnection should help you understand that you should look at supporting the brain as well as decreasing your stress as part of your adrenal therapy.

This is an important point because to truly recover from adrenal fatigue, or what we now call HPA axis dysfunction, we need to be looking into areas of the body that control adrenal function, the brain and things that have a negative impact.  Emotional and physical stressors, the hypothalamus and pituitary, sleep, alcohol etc.  These are all talking points when working with HPA axis dysfunction.

Now that we’ve got the heavy lifting out of the way, let’s talk about some treatments.  Stay tuned for Part II.