A survey conducted by the World Health Organization (WHO), of nearly 10,000 adults concluded the following about antibiotics:

– Nearly two thirds say they know antibiotic resistance is an issue that could affect them and their families, but how it affects them and what they can do to address it are not well understood.

Clearly the medical community is not educating our patients well enough about this issue.
With the high prevalence of antibiotic usage it is important that we are aware of the mechanisms on how they work and consequences they could have. With all the current research and wide spread fear within the medical community of this growing resistance you could imagine a strong stance is being taken to lessen the frivolous use of antibiotics. Well, you would be wrong.
According to Medscape, antibiotic usage had been rather steady from the years 2006 to 2012. But a closer look at the steady state of prescription and we see a growing trend of the use of broad-spectrum (possibly the worst offender in this resistance mess) increase, dramatically. This data was collected from approximately 300 hospitals across the country. Modern day antibiotics were first discovered sometime in the 1920’s when Andrew Fleming saw penicillin’s ability to kill bacteria in the lab. Did you know we began to see resistant strains of Staphylococcus (bacteria) almost immediately after the introduction of penicillin?

How do antibiotics work? 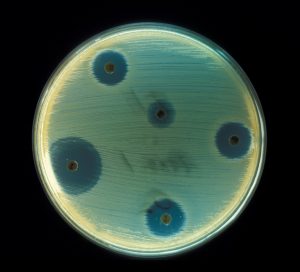 Antibiotics are compounds that inhibit microbial growth via breaking down a component of the cell or disruption of the DNA mechanisms. Some antibiotics effect the replication of the organism and others break them apart and allow the immune system to clean-up the debris. Different organisms are sensitive to specific chemical compounds, i.e. Amoxicillin for certain bacteria and Nyastatin for fungal infections. This is why we have so many different kinds of antibiotics, i.e penicillin, Cephlasporin, tetracycline etc. These types of antibiotics are made by many companies and carry unique names you are more familiar with, to the tune of over 100 different kinds. They all hold roots in the main 7-8 mechanistic categories.
There are some antibiotics that span multiple genres of infections, but are less common (Bactrim is an example).

What is the problem?
Antibiotic therapy is one of the modern marvels of medicine and has saved countless lives. General infections, pre and post surgery, bug bites, urinary tract infections, fever, you name it; antibiotics have been known to play a large beneficial role. Unfortunately, their strength and noted benefits have made them an easy target for over prescription and abuse—lazy medicine. Doctors have over-utilized this therapy and we are starting to feel the repercussions. When was the last time you heard someone leaving an urgent care facility without an antibiotic in hand?
A majority of these complaints often do not merit antibiotics due to their cause being viral rather than a bacterial. A majority of the complaints are minor enough and will self-resolve on their own. Now more than ever it’s paramount for your doctor to take the time to discern between the different categories of infectious agents and administer the proper therapy.
Now, it would not be fair to only point the finger in one direction. Patients have to understand the different severities of illness and react appropriately. Attending a doctor’s office for the sniffles is what is considered and ‘error prone visit’. What does this mean? Many physicians claim that they are pressured by their patients to do something for their complaints (prescribe antibiotics) and if not they feel our perception is that of weakness or being incapable. For this reason they prescribe a general antibiotic to appease the demanding patient. A statement put out by the CDC (Center for Disease Control, 2012) stated an estimated 50 percent of antibiotics are over prescribed. About 70 percent of the bacteria that cause infections in hospitals are resistant to at least one of the drugs most commonly used for treatment. If this trend does not stop–the minor diseases of today will turn into the life-threatening diseases of tomorrow. 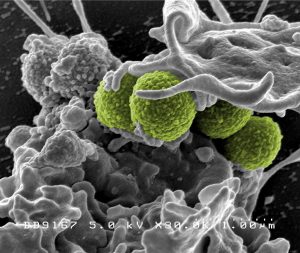 Contrary to popular thought, antibiotic resistance is not that of your body being resistant rather it is the microbes are no longer being killed off or inactivated by the antibiotic. They have, for lack of a better term, become “immune” to the antibiotics.
Think of it as “only the strong survive”. For obvious reasons this is not ideal—not only have we failed to get rid of the current problem but have begun the evolution of “super bugs”. These “superbugs” lead to high treatment failure rates, increased healthcare cost, lost wages and even death in some instances. Resistant bacteria can pass their resistance genes to other kinds of bacteria further complicating the issue.
Have you ever heard of methicillin-resistant Staphylococcus aureus (MRSA)? What about Clostridium difficle (C. diff)? Both of these infections are due to the species that have become resistant to antibiotics. Beginning soon after the introduction of methicillin (an antibiotic) we began to see the emergence of resistant strains of S. aureus dating back to the 1960s. C. diff bacteria is actually part of our normal flora (the microbes found in us) and only becomes an issue when your good microbes are decreased and C. diff is allowed to flourish, unchecked. MRSA has become somewhat of a household name. This is unfortunate. MRSA is now treated with and antibiotic, Vancomycin. When Vancomycin was introduced in the 1950s it was said to be isolated from bacterial resistance. Fast-forward to present day and we have now seen VRSA or Vancomycin resistant Staphylococcus aureus.
How is this possible? Well vancomycin is also used in other infections and possibly even over-prescribed; due to its strength it is a popular antibiotic for many gastrointestinal microbes such as C. diff. Vancomycin also holds some serious side effects beyond that of exaggerating resistance. Sometime in the late 90s we saw the first strain of Vancomycin resistance S. aureus and with the decline in America’s health we have only seen it become more prevalent.

Post-Antibiotic Syndrome
Have you ever felt really good while on antibiotic only to be plagued with a yeast infection or altered bowels or maybe you didn’t notice much of a negative immediately after. Maybe you started to get sick more often that year than other years but chalked it up to stress. These signs as well as others all fit into the post-antibiotic conundrum. “Post-antibiotic syndrome” is not reserved for just those immediate issues following antibiotics such as C. diff and yeast infections. We are now recognizing its disruption of the entire microbiome of patient’s gastrointestinal tract months after the removal of the therapy. We have seen this occur in fecal studies; a single course of antibiotics has negative effects on GI microbes for up to a year and possible longer.
Alterations in the GI tract cause, or at very least contribute to, many of the chronic autoimmune diseases we see today. Allergies are enhanced by poor gut flora, skin conditions such as eczema are driven by a dysfunctional GI system and even mood disorders have all been linked to poor interactions between our chemistry and those organisms that inhabit us.

Where do we turn?
It is important to mention that not all antibiotics are bad. It is the incorrect and excessive use of antibiotics that has become 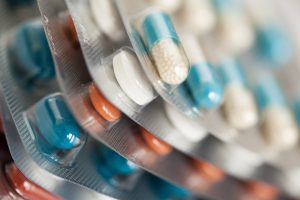 the issue. You have many more options than you may think when it comes to those symptoms traditionally treated with antibiotics. Immunotherapies are on the rise. Immunotherapies are those compounds that work with your immune system to fight off the infection. This is for good reason- there is no better antibiotic than our own immune response, period. Natural Medicine Practitioners used immunotherapies for centuries as it enhances your own immune response normally leaving you with long-term immunity and lower rates of resistant bacteria.

Thankfully there is still time to make some changes. We are not completely helpless against these superbugs but we are very close. First we need to educate of those prescribing antibiotics; when are they necessary and when should one be given other options for treatment. Much of this problem stems from the inadequacies of the ‘system’ that doesn’t allow the doctor to spend more than a few minutes with you. Second, I am not sure we should continue to practice the idea of giving someone antibiotics for viral infections just in case they contract a secondary bacterial infection. The literature does not support this method nor do the benefits outweigh the costs. Third, working with your doctor to develop a good lifestyle plan can help prevent you from getting sick in the first place. There are certain compounds particular foods that fuel the proper immune response. There are even herbal preparations that have strong effects on already resistant bugs. Some compounds are even more effective than antibiotics and do not pose as great of a risk for resistance.

Here are some quick tips to stay well:

• Wash your hands regularly but do not use hand sanitizers
• Do not prepare foods when you are sick; there are many bacteria and viruses that can be spread this way
• Clean all surfaces properly after preparing food; especially raw meats
• Look into ways to fortify your immune response, i.e incorporating more colorful fruits and veggies and/or exercising regularly.

Experts fear that one of the greatest contributors to resistance has nothing to do with you and your doctor. Agricultural practices account for over 60 percent of antibiotic usage in the U.S., so this adds an additional 18,000 tons per year to the antibiotic burden in the environment. Did you know a majority of the use is non-therapeutic–meaning the animal receives antibiotics with no indication, sign or symptom? Antibiotics were not created to prevent infection they were made to treat infection. Infection prevention should come from health promotion–safe and spacious living environments, high quality food and drinking water, and a natural habitat and lifestyle. Antibiotics resistance genes are added to early developing crops to allow the use of certain herbicides and not kill the plant. Unfortunately these antibiotic resistance genes are not removed from the final product. This can be another contributing source to antibiotic resistance.

We are in the days of fast paced, corporate medicine. Average doctor visit is 5-7 minutes and there is not much you can learn in that time. Think about the time it took you to read this article do you think learning the full health history for a 55-year woman can be obtained in that time? Educate yourself, demand more from your doctor and put prevention of sickness and disease above all else. Waiting to do something about your health is like “digging a well when you are already thirsty”.