Benefits of Drinking Kombucha & How to Make It 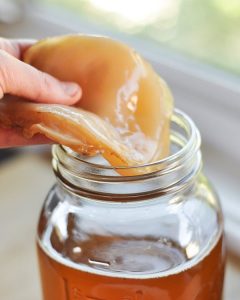 It is very common now to see glass bottles front and center in the grocery store, filled with carbonated, ginger flavored kombucha. What the heck is kombucha? Why are so many people consuming it?

Kombucha is a fermented drink consisting of tea and sugar that’s used as a probiotic food. During the fermentation process of creating kombucha, a large number of healthy bacteria grow.  Yeasts use the sugar in the tea to produce ethanol. This is then consumed by bacteria to produce acetic acid (vinegar). During the process of fermentation, a SCOBY develops. SCOBY is an acronym for ‘Symbiotic culture of bacteria and yeast’.

Kombucha may help support the liver due to its strong antioxidant activity. One study found that after treatment with Kombucha in acetaminophen induced liver damage, liver markers dropped. Before treatment, there were increased levels of aspartate aminotransferase (AST), alanine transaminase (ALT), alkaline phosphatase (ALP) and lactate dehydrogenase (LDH). Following treatment by Kombucha, these levels all dropped significantly (6).

The live culture in this drink provides many beneficial probiotics. Probiotics can provide your gut with healthy bacteria. These can help to improve digestion, inflammation, and decrease gas and bloating. When made with green tea, there are many additional benefits provided. Green tea contains many bioactive compounds, like polyphenols, which act as very strong antioxidants within the body (7). Drinking green tea can increase the number of calories you burn, decrease belly fat, improve cholesterol levels, and can also help with blood sugar control (8).

Since this drink contains both anti-microbial and beneficial yeasts, it works well at reducing candidaovergrowth. Overgrowth of this potentially pathogenic yeast can lead to (3):

The low pH and presence of anti-microbial metabolites present reduce the competition of other bacteria, yeasts, and fungi. This may be effective at reducing H. pylori known for causing peptic ulcers, or E. coliknown for causing diarrhea (2). This antimicrobial activity is attributed to the low pH value of this drink. 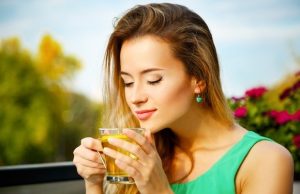 There is a very strong connection between the gut and the brain. Something referred to as the gut-brain-axis. Recent evidence has linked dysbiosis and inflammation of the gut to causing several mental illnesses including anxiety and depression. It has been found that probiotics have the ability to restore normal balance within the gut, therefor they have a potential role in the treatment of anxiety and depression disorders (9).

In a study published in Psychosomatic Medicinefecal samples were supplied by women. MRIs were taken of their brains as they viewed different imagery that evoked different emotional responses (5). It was found that one group of women had a high amount of Bacteroidsand the other had high levels of Prevotella. It was found that women who had the Bacteroidsshowed greater thickness in the gray matter in the frontal lobe- areas of the brain associated with complex processing of information. The women who had higher levels of Prevotellashowed more connections between emotional, attentional, and sensory brain regions. These women also rated higher levels of negativity such as anxiety, distress, and irritability while looking at negative imagery when compared to the other group. This study suggests that there is a major connection between emotions and gut function (5).

Kombucha is considered generally safe, however there are some concerns that people may have.

How to Make Kombucha:

Alright, alright, so now that you know the many benefits of Kombucha, I’m sure you’re interested in how to make it on your own. 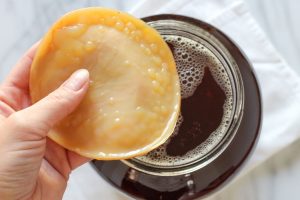 This is a normal/healthy looking SCOBY.