How Does the Female Menstrual Cycle Work?

One of the most common things I hear in practice from women after describing the menstrual cycle to them is “I had no idea that’s how that worked.” So today I want to share that same information with you all! We’ll start from the beginning. A woman’s menstrual cycle is regulated by several hormones: estrogen, progesterone, luteinizing hormone (LH), and follicle stimulating hormone (FSH). 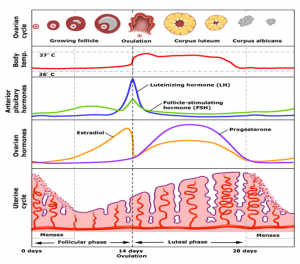 The menstrual cycle can be divided into 2 phases: the follicular or proliferative cycle and the luteal or secretory phase. The average length of a cycle is 28 days, but can range from 25-30 days. The typical amount of blood lost during menstruation is 30 mL (not sure how much you’re losing? Check out a menstrual cup that can help measure the amount of blood). Click here for a link to cup that I use- The Diva Cup. 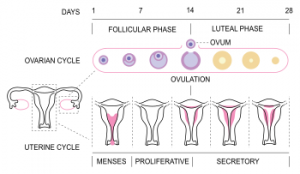 Ovarian and Uterine changes during the menstrual cycle.

Day 1 of the menstrual cycle is marked by the first day of bleeding. This also marks the beginning of the follicular phase which persists until ovulation. During this time, body temperatures are lower and the development of ovarian follicles begins. Folliculogenesis (or development of the follicles) begins the last few days of the preceding  menstrual cycle until the release of the mature follicle at ovulation. Women begin puberty with around 400,000 follicles- holy cow! The development of the follicles occurs in several stages. Multiple follicles develop at once, and by day 8 of the cycle, the body recognizes the “strongest” follicle and promotes more growth of that follicle while suppressing growth of the other follicles. This “strong” follicle will eventually develop into the egg we release at ovulation. In women with PCOS, these follicles may stay enlarged and turn into ‘polycystic ovaries’. 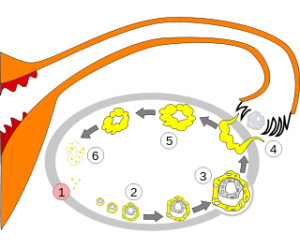 Development of the follicle with #1 representing the beginning of development.

During this phase, estrogen increases to parallel the growth of the follicle. Granulosa cells exist within the ovary and help to produce hormones. On these cells, there are receptor sites for a hormone called ‘Follicle Stimulating Hormone’ or FSH. As FSH is released from the pituitary gland (in our brain), it stimulates the conversion of androgens (more ‘male like’ sex hormones), on the granulosa cells, to estrogen. With a dramatic rise in estrogen, the brain releases Luteinizing Hormone (LH) from the anterior pituitary gland. The LH surge occurs around 34-36 hours prior to ovulation. This surge stimulates the production of progesterone. Ovulation occurs around 10-12 hours after a peak in LH. 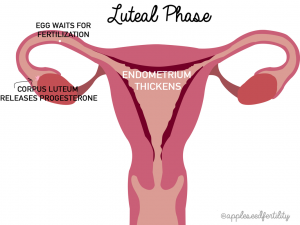 If you’re trying to have a baby- this is when you want to have sex! During ovulation, our libido increases, and men find us more attractive- research proves this! One study has went as far as to have men sniff “dirty t-shirts” and determined that they still find ovulating women more attractive! We want that released egg to meet up with sperm so that it can implant on the uterine wall. Not to fear- if you DON’T want to get pregnant, avoid sex at this time. After the peak in LH stimulating ovulation, there is a drop in estrogen levels. The next phase- the luteal phase, is dominated by progesterone. The luteal phase is typically 14 days long. Following ovulation, the remaining cells that are not released at ovulation become enlarged. This eventually forms the corpus luteum. The corpus luteum is a transient (short lived) endocrine organ that primarily secretes progesterone. This is why the second half of the cycle is dominated by progesterone! The purpose of this is to prepare the previously “estrogen primed” endometrium for implantation of a fertilized egg (why ovulation is the most fertile time of the month!). Corpus luteum function declines by the end of this phase if implantation does not occur and progesterone levels drop and the endometrial lining is shed. Yay! Menses!